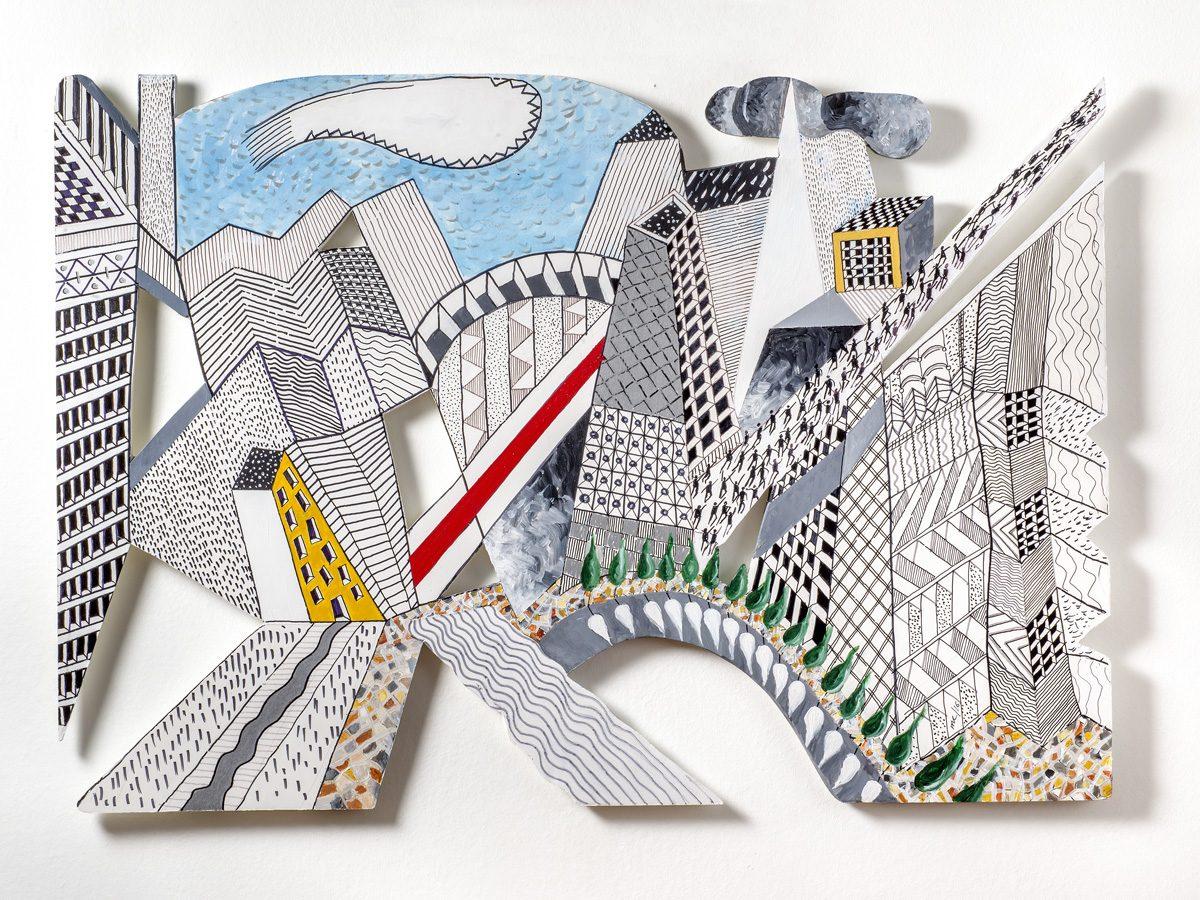 by Marios Camhis
at Hellenic American Union Athens
During meetings without interest, on the phone with an interlocutor who has many things to say, when you try to take a difficult decision, we tend to draw lines on any paper it happens to be in front of us.

This process is known as “doodling”, that is: to scribble, sketch … while thinking about something else. Doodles are simple drawings that can have concrete representational meaning or composed of random and abstract lines, thoughtless drawings done to relieve boredom.”

In Greek the equivalent expression would be «Εική και ως έτυχε». The word “εική” is an adverb of ancient Greek meaning “without a plan or objective, without a purpose haphazardly, for pleasure”.

I have kept these haphazard sketches. They inspired some of the paintings presented in this exhibition.

“Disjointed incrementalism” is the “logical” dimension that accompanies the “haphazard”.

In 1963 D. Braybrook and C.E. Lindblom in their book “A Strategy of Decision” developed a theory of planning/decision making which they named “disjointed incrementalism”. This theory was presented as an alternative to “rational comprehensive planning”, an approach that requires the formulation of a global final plan.

Incrementalism is a method of working by adding to a project using many small incremental changes instead of a few, extensively planned, large jumps. Policy makers in this mode are looking for analyses that can provide support to decisions that are already half-made. Any new evidence which fits in and which is presented at just the right moment, has a good chance of being used.

A drawing can start with a line. From this first line one proceeds step by step – line by line- always in conformity with the previous one, in a haphazard or sensible way. When an anomaly is presented, then the anomalous section is being discarded. This process is completed when the whole has a structure that “stands”.

Human beings, appear here and there, in terraces without parapet or dead-end roads.

The Random and the Rational

The iconography of Marios Camhis is characterized by extraordinary vividness featuring exceptionally detailed references that capture the gaze of the spectators, urging a second reading. Everything is imaginary, yet everything seems experienced and familiar. In his meticulous drawings the artist usually tends to express himself through the display of black-and-white masses, assigning a decisive yet complementary role to color. The multitude of iconographic thematic fusions featuring masterful gradations of proportions, from the small human scale to the monumental dimensions of the buildings, vests his paintings with a remarkable dynamic. In addition, his works feature a unique plastic effect thanks to their polygonal edges and the gaps created by removing entire parts from the surface of the painting. These resourceful visual interventions endow his painting compositions with a low- and high-relief, three-dimensional quality, with a tangible sense of depth, delivering an entirely original aesthetics to his individual artistic identity.

The three key words that essentially characterize his work, according to the artist himself, are: “the random, the rational and the dead-end”.

The “random” because his visual script is self-evolving, allowing the lines and diagrams to instinctively morph into structured environments. Parallel, perpendicular and intersecting lines, heterogeneous geometric shapes, crooked stripes, varying volumes, trompe-l’oeil diagrams and scattered flecks of natural elements, all combine to create extremely descriptive architectural narratives. No composition of Marios Camhis is premeditated or based on a draft study; each work ensues haphazardly through random improvisation on paper, as the exhibit’s title also suggests.

The “rational” because his compositions are governed by absolute logic. Everything on display has been combined “randomly” yet through logical thinking. Besides, logic is emphatically present both in the structure of his geometric compositions and in the narrative flow of his works. Even when he is painting detached and completely free, his background in architecture, city zoning and urban planning is a crucial factor in the final aesthetic configuration of his works. Each artwork is composed of the depiction of entire residential worlds. It captures large cities with clusters of roads and highways, vast arcades and bridges, uphills and downhills, skyscrapers and massive architectural complexes, forests and groves, seas and rivers. At the same time, amidst the complex residential arrangement on display, the artist makes sure to incorporate the human presence.

The “dead-end” is stated as a conceptual reference via the illustrations of schematic miniature human figures appearing as preys lost adrift the complexity of the clusters of buildings. People appear caught between dead-end building complexes, at times as part of the detailed qualifying iconographic references and, at other times, as complementary iconographic remarks. Also invoking the feeling of a dead end is the overall atmosphere of the works, highlighting the isolation of man amidst the monumental dimensions of urban planning of non-human scale.

The form-shaping geometric arrangement in the works of Marios Camhis and the perceived augmented perspective effected through the gouged elements, which essentially interact with the surface of depth, create a multicomponent environment and turn his paintings into visual installations of extraordinary narrative power. A significant part in achieving this vocality is played by the selective, radical uses of color, the demarcations with pervasive strips of red tape, the yellow facades, the shades of cement gray and the discourse with the blues and greens of nature. In this way, the artist creates a continuous visual play between the familiar and the unfamiliar, which comprises one of the primary features of the style in which his themes are rendered. Amidst the labyrinthine complexes of the artificial world and the allusions to human activities, the artist also depicts natural elements, such as the sea, the sky, the rivers and forests. These often transcendental, skillfully designed alternations between the natural and artificial landscapes afford each spectator multiple visual stimulations for his or her personal methexis. For there is no doubting the representational skill of Marios Camhis nor the pictorial and communicative power of his fascinating hyper-realistic microcosms of multi-sensory nature. 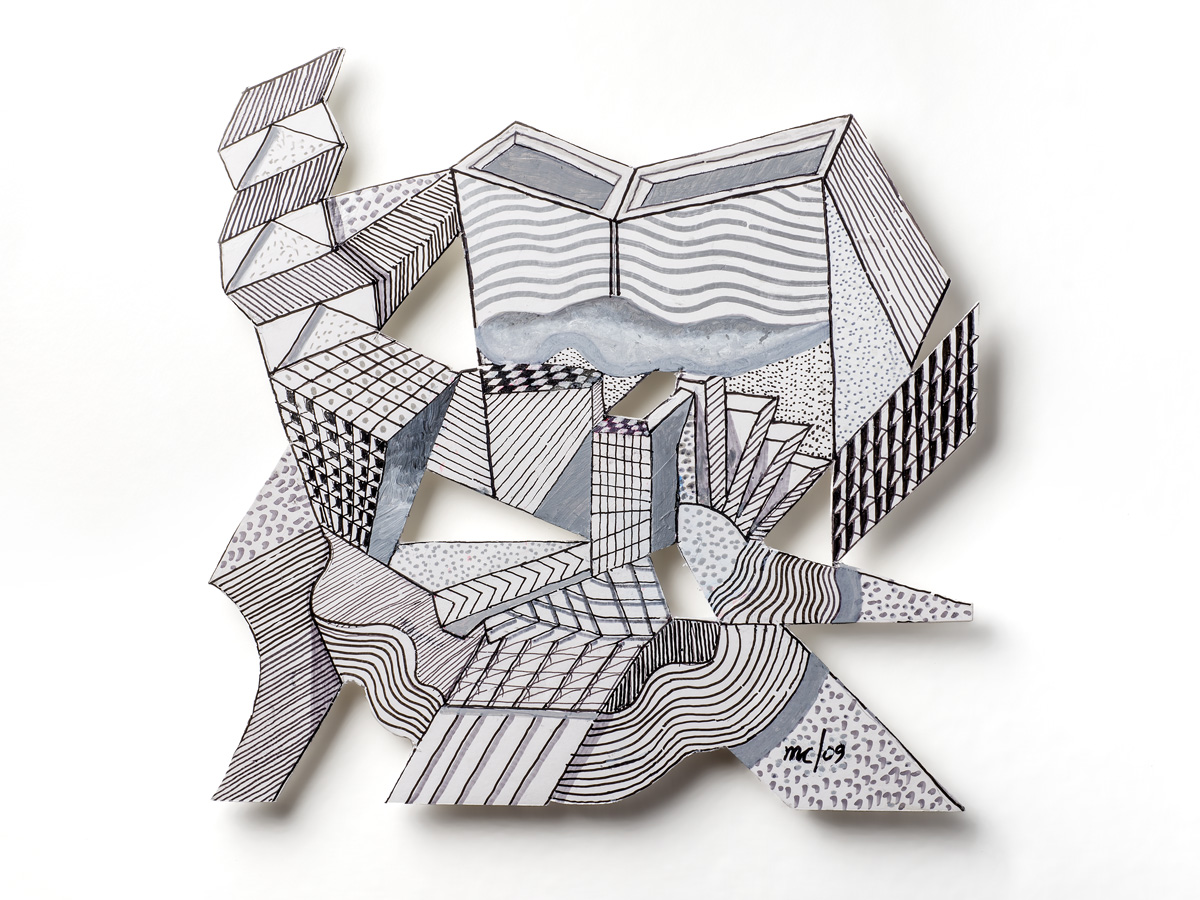 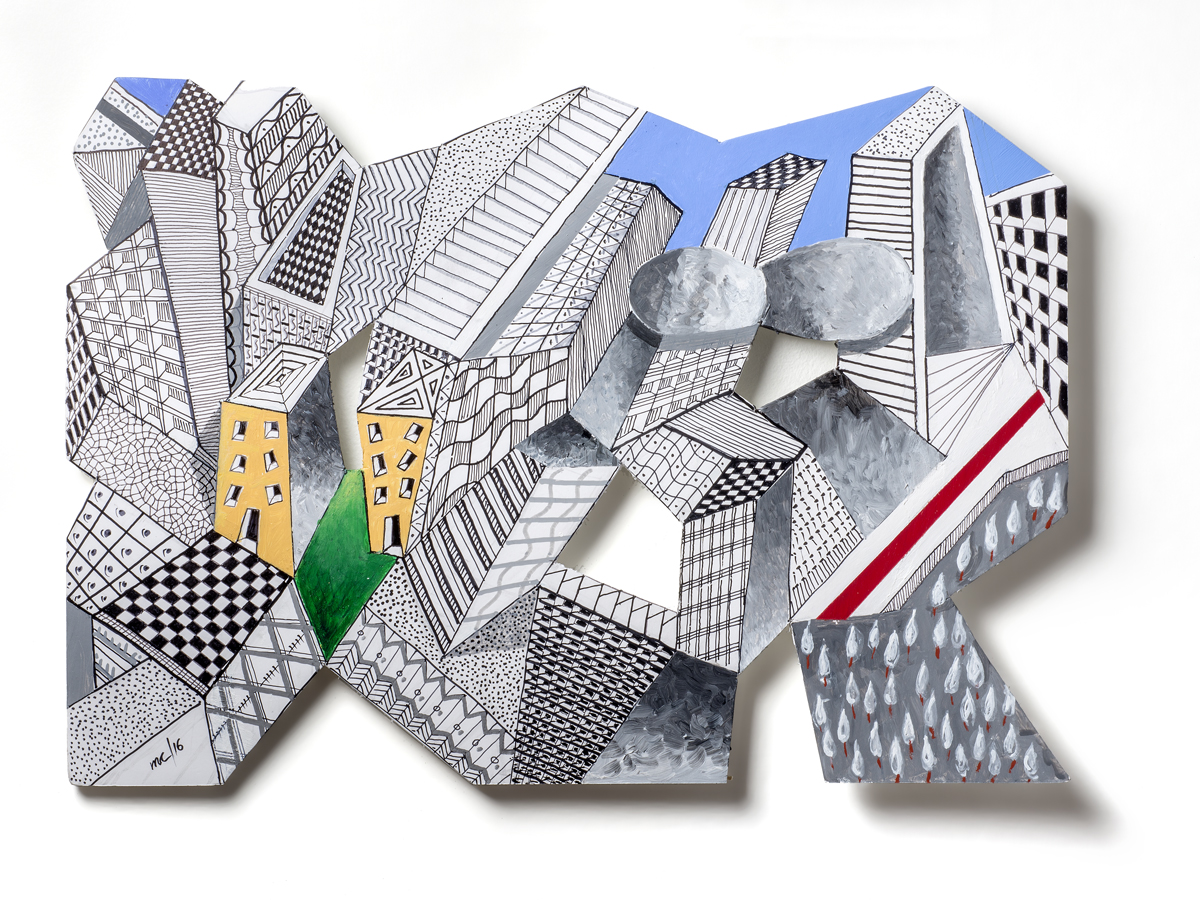 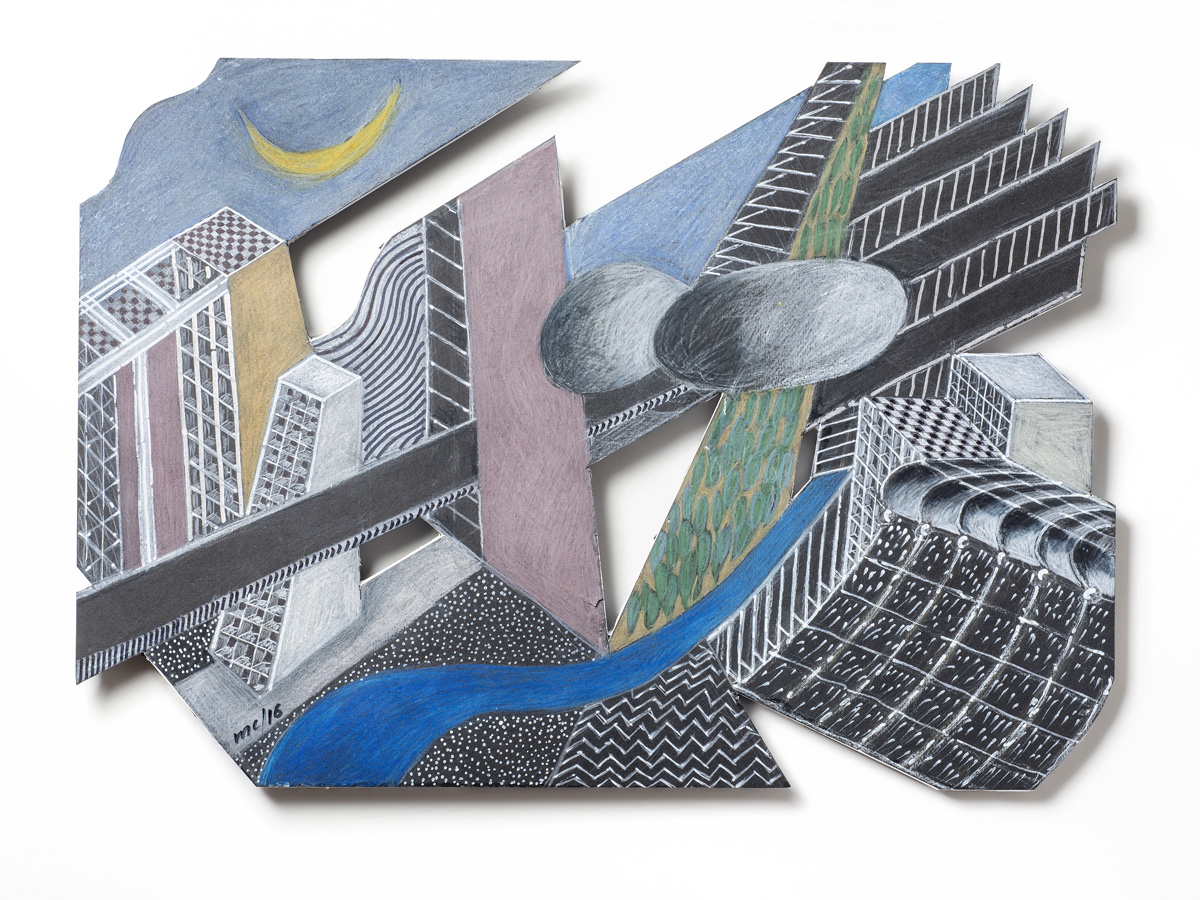 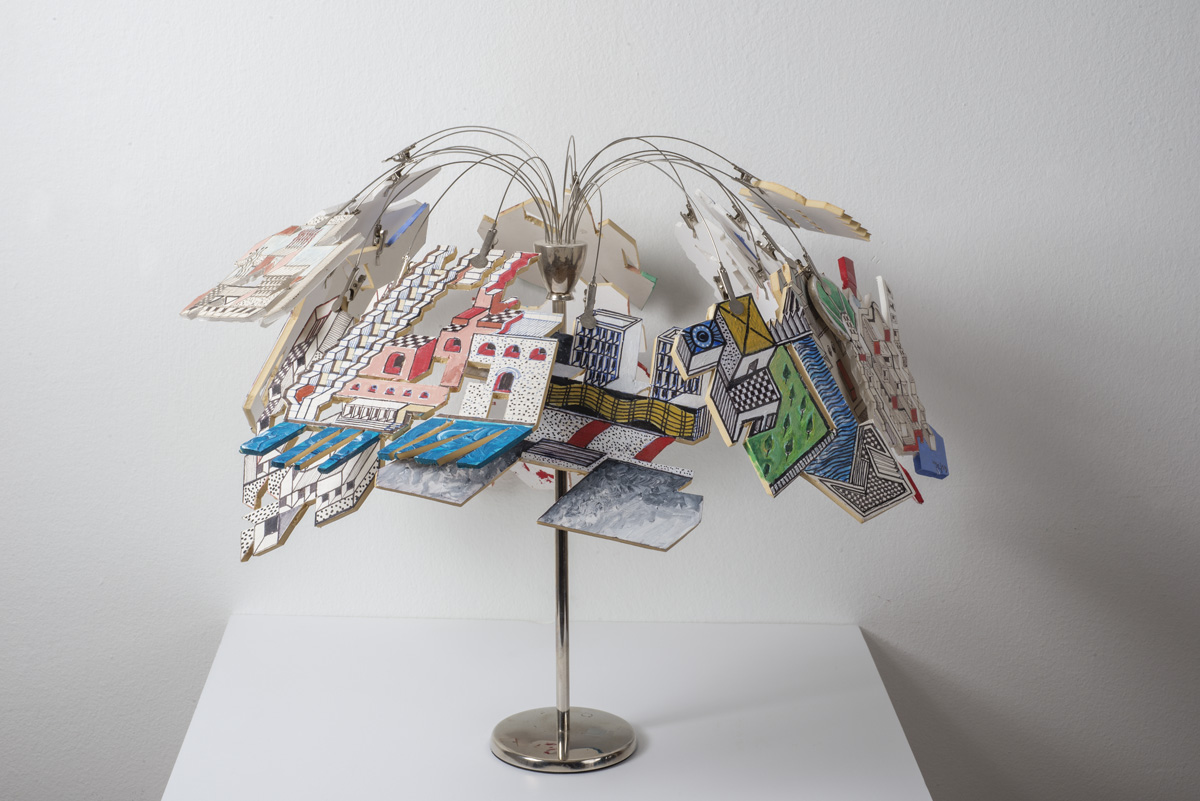 No. 35
No. 35 Collection of doodles on papercardboard, pencils, markers, acrylic 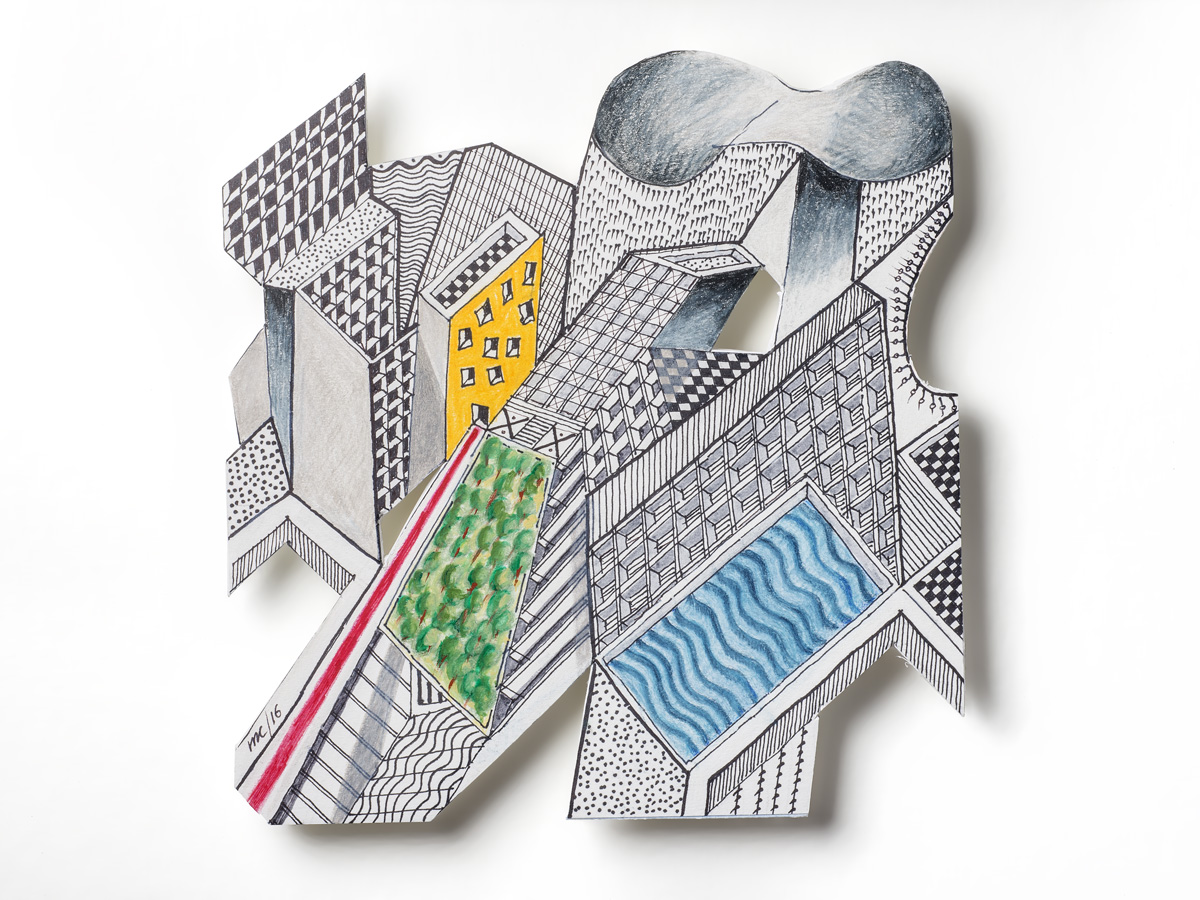 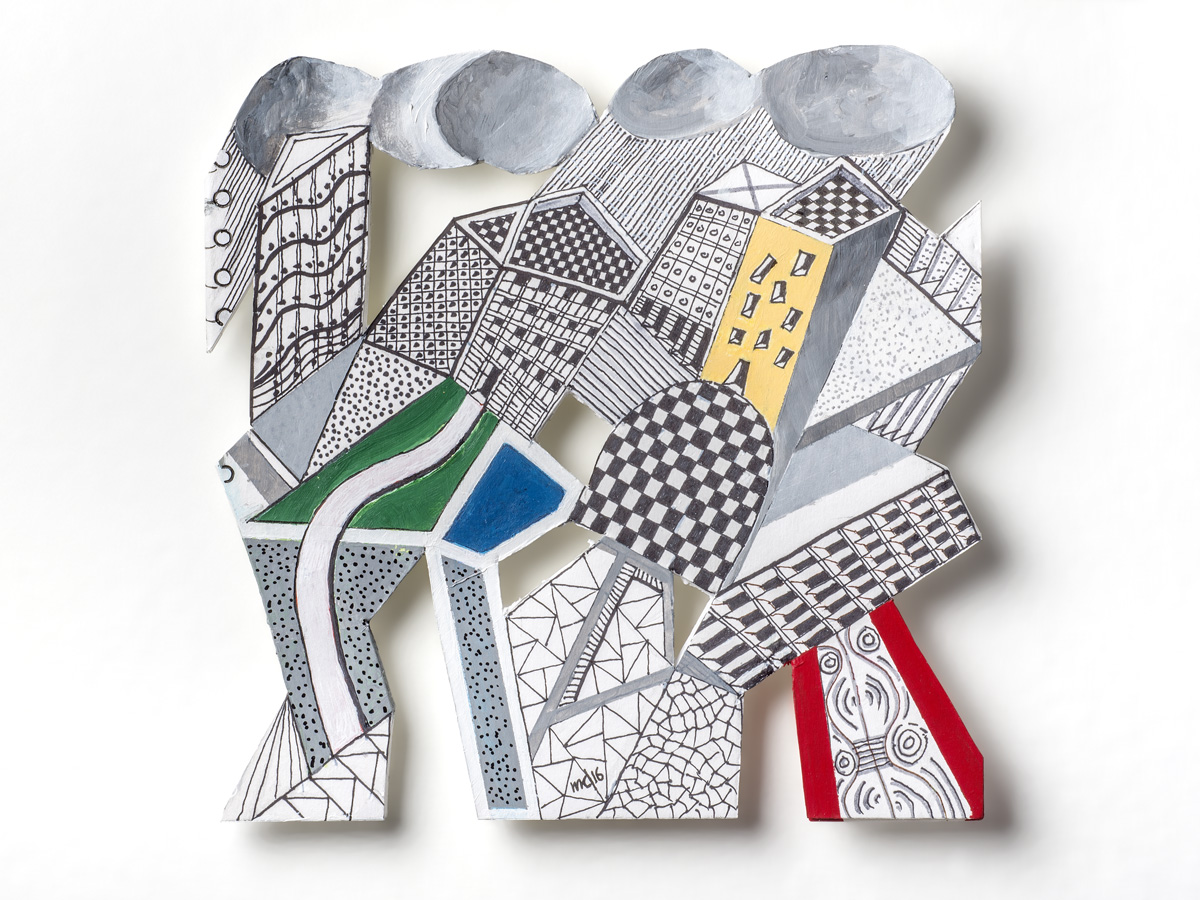 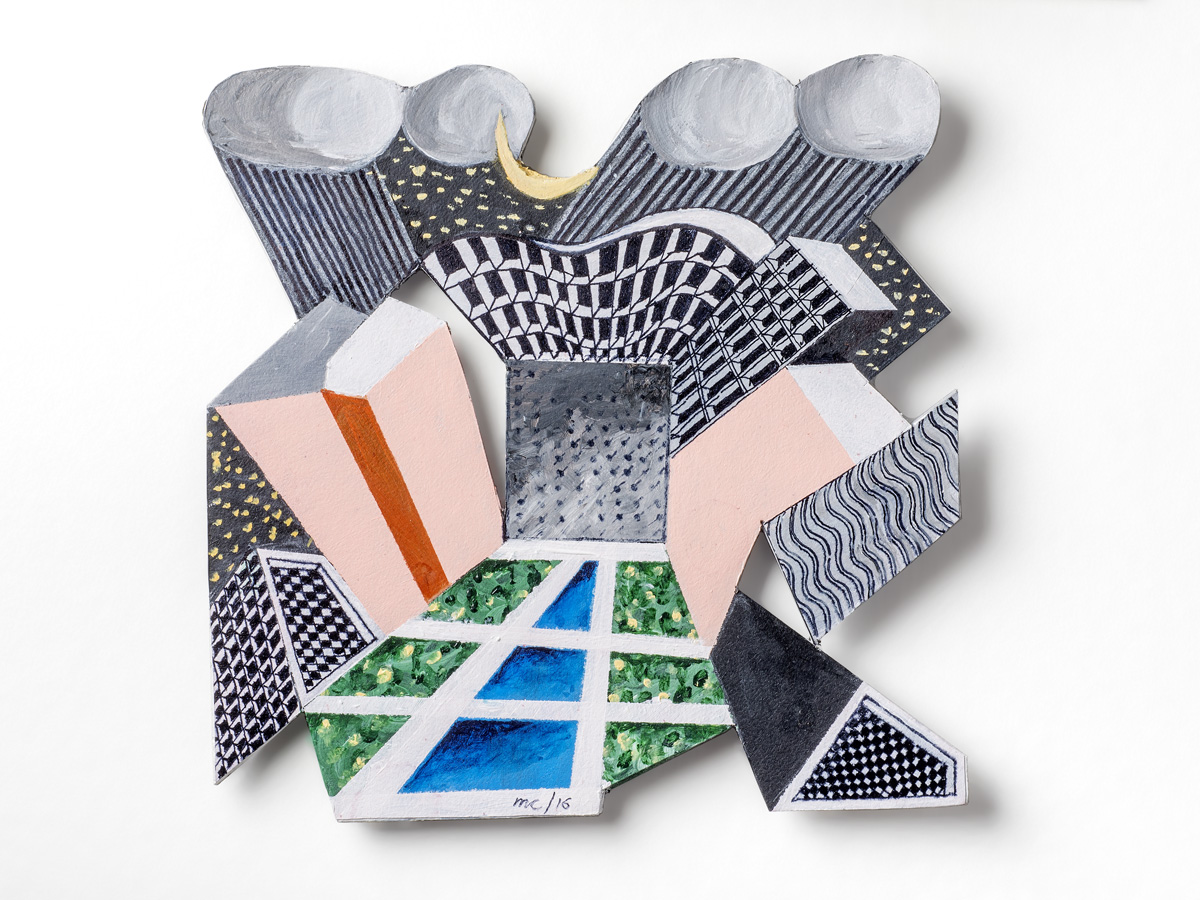 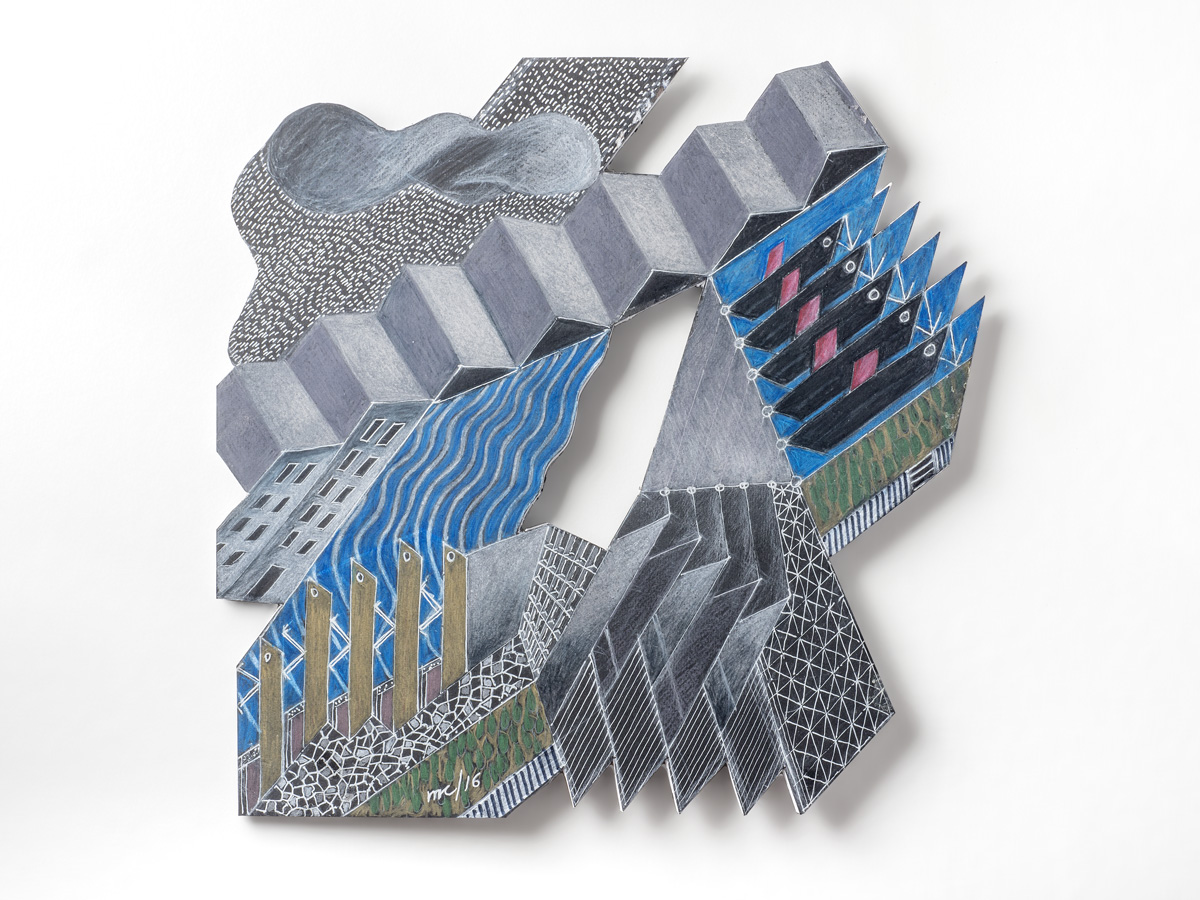 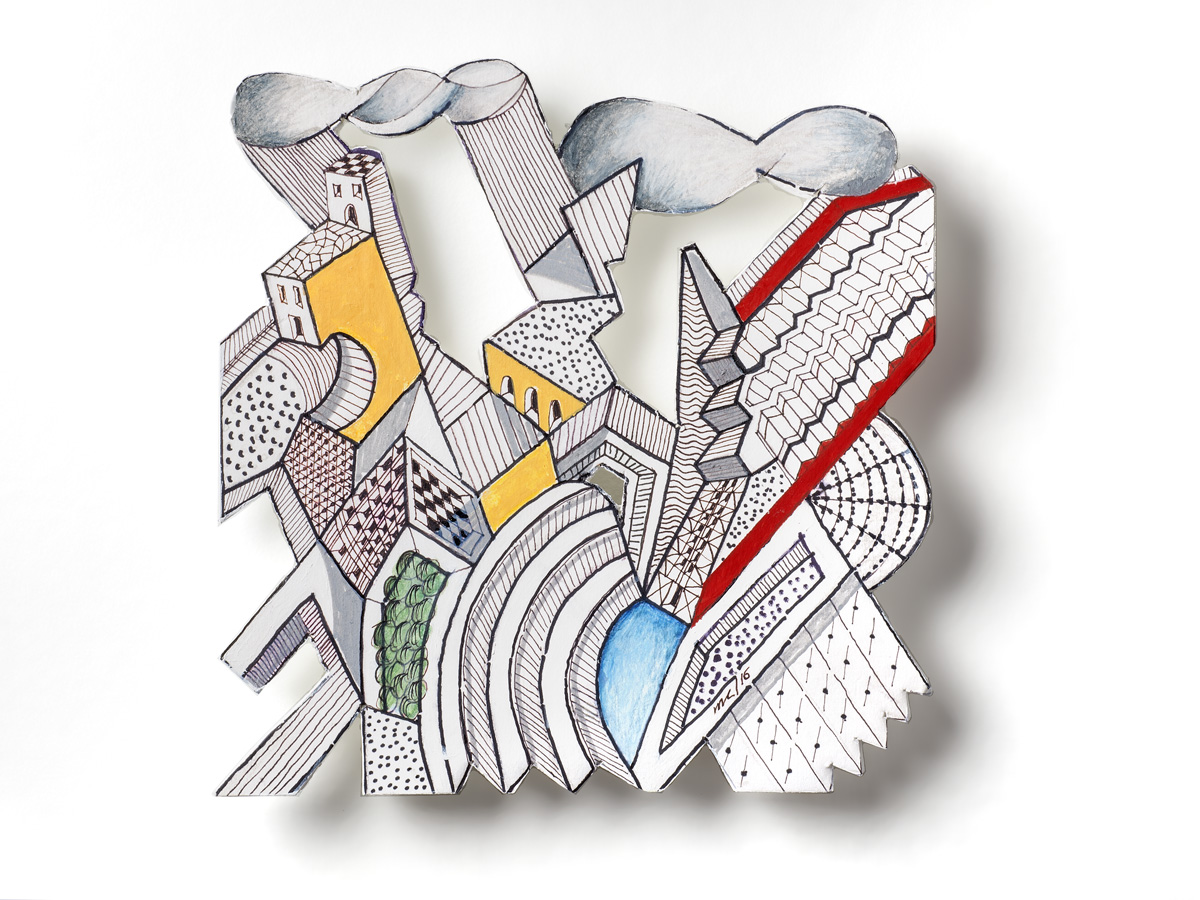 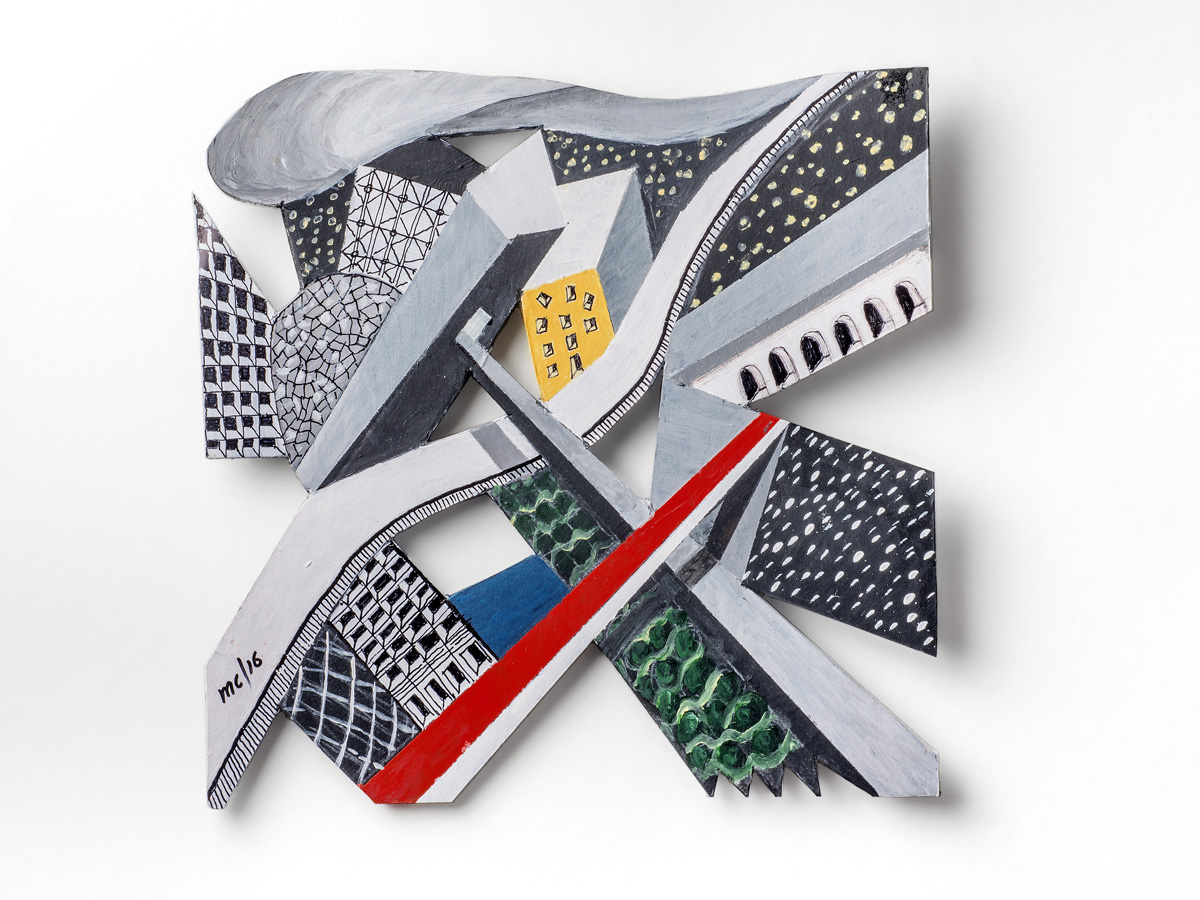 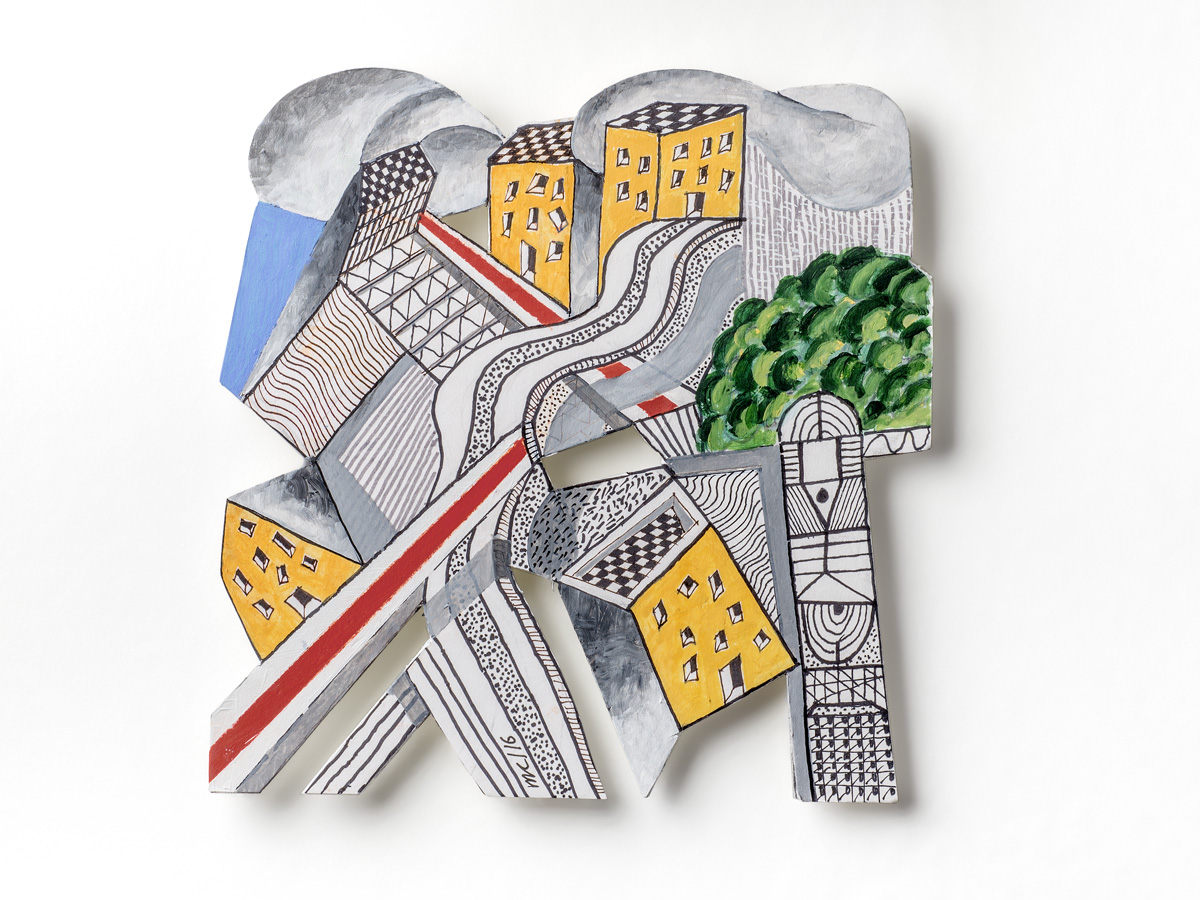 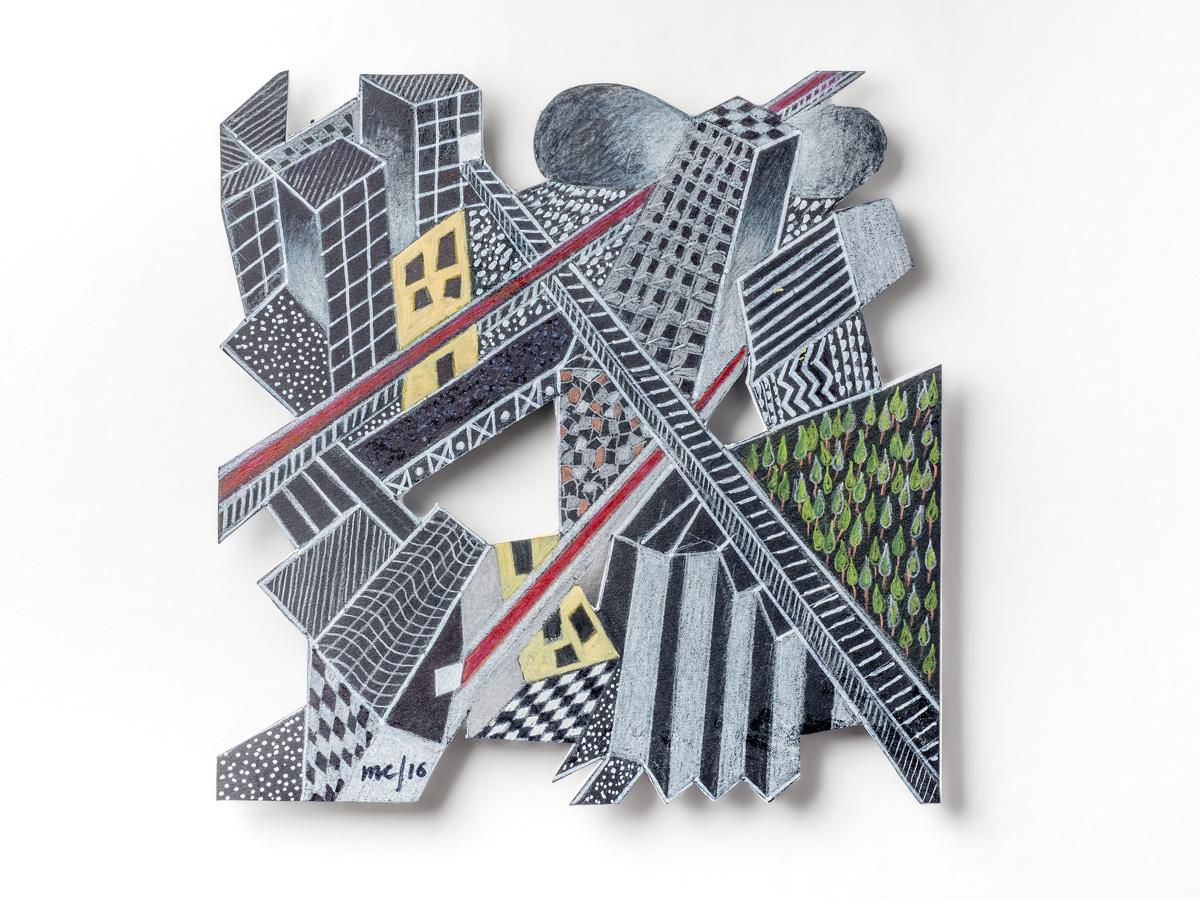 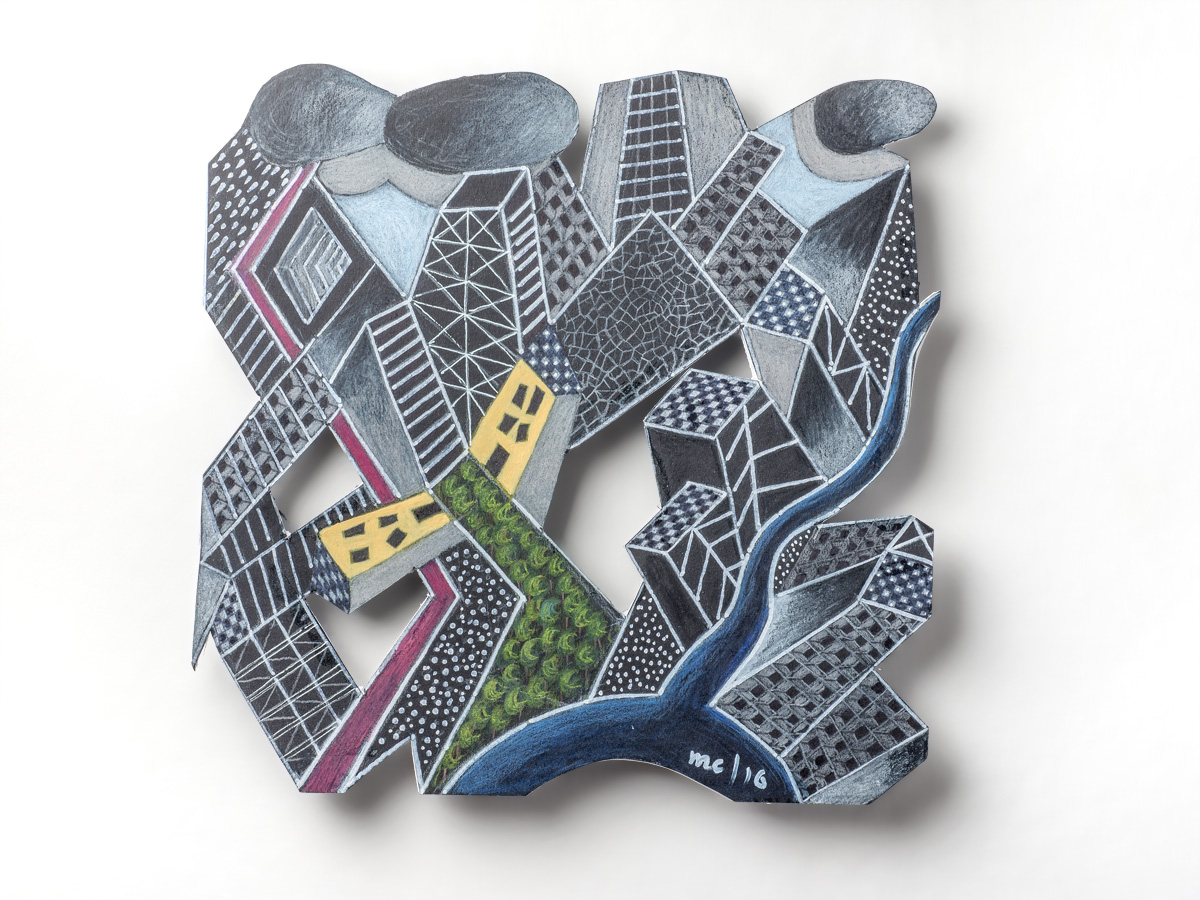 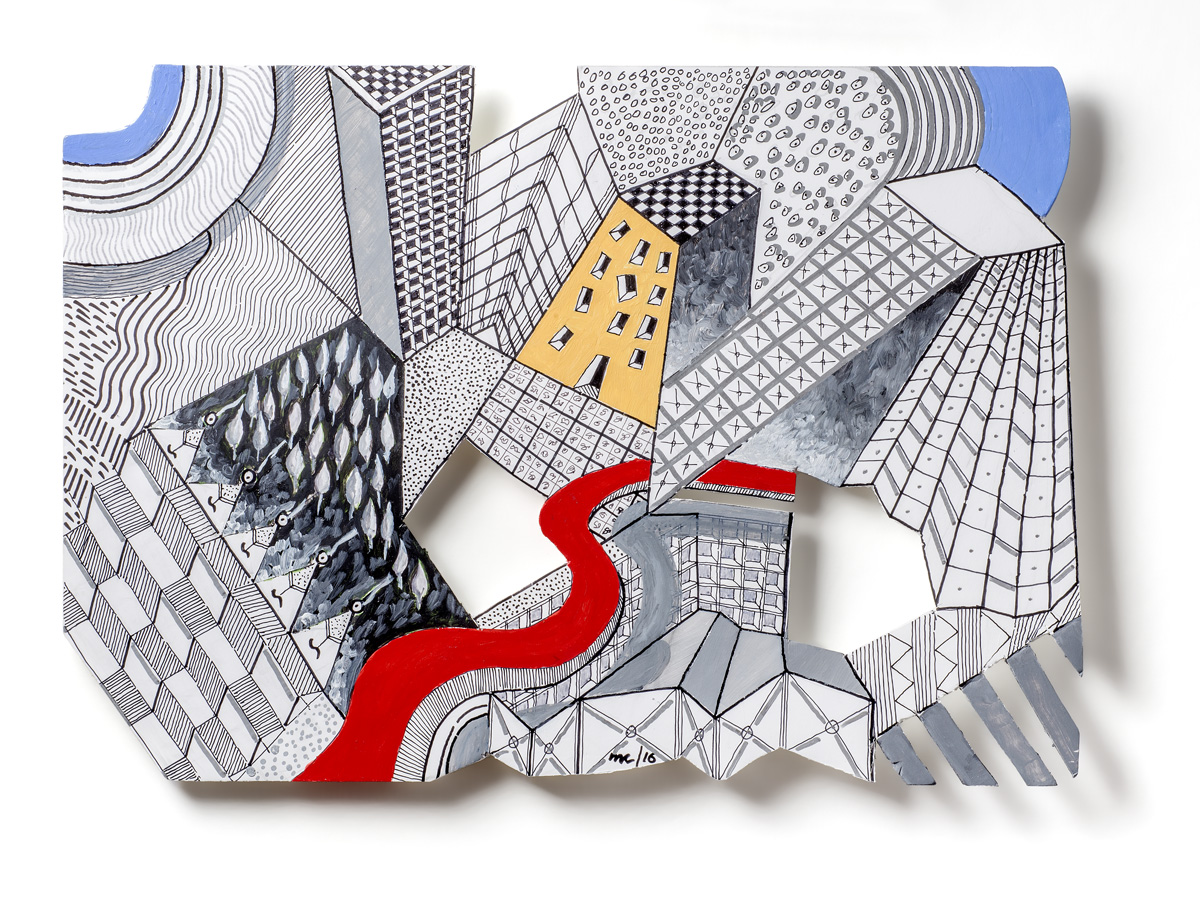 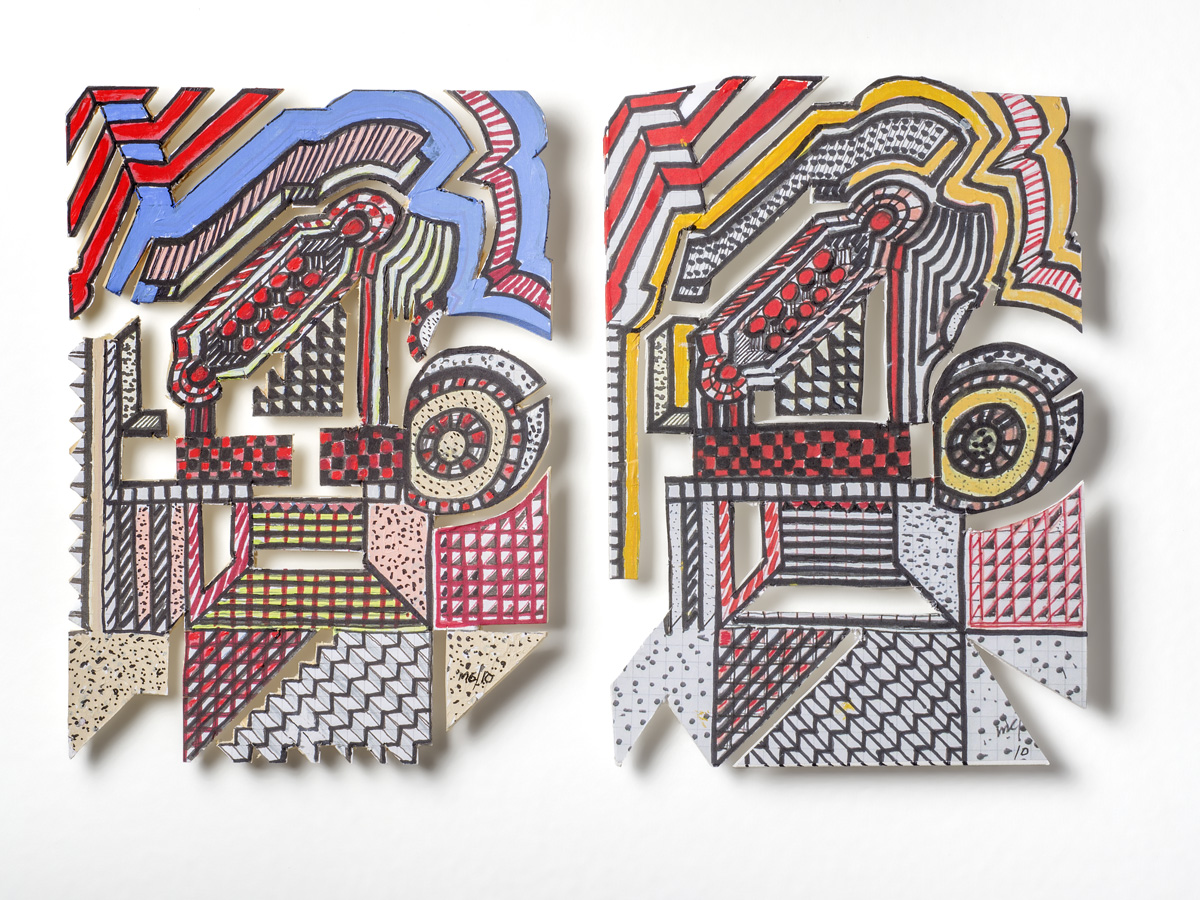 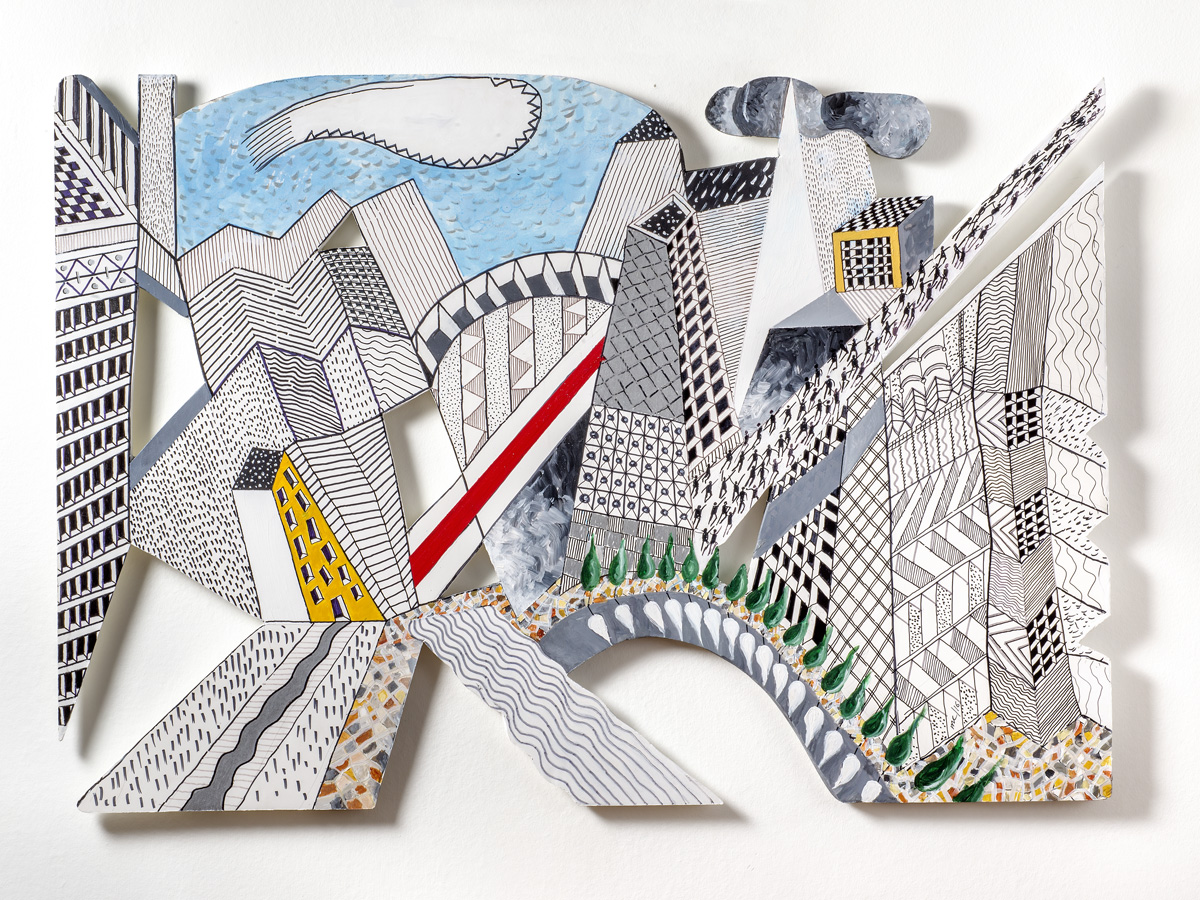 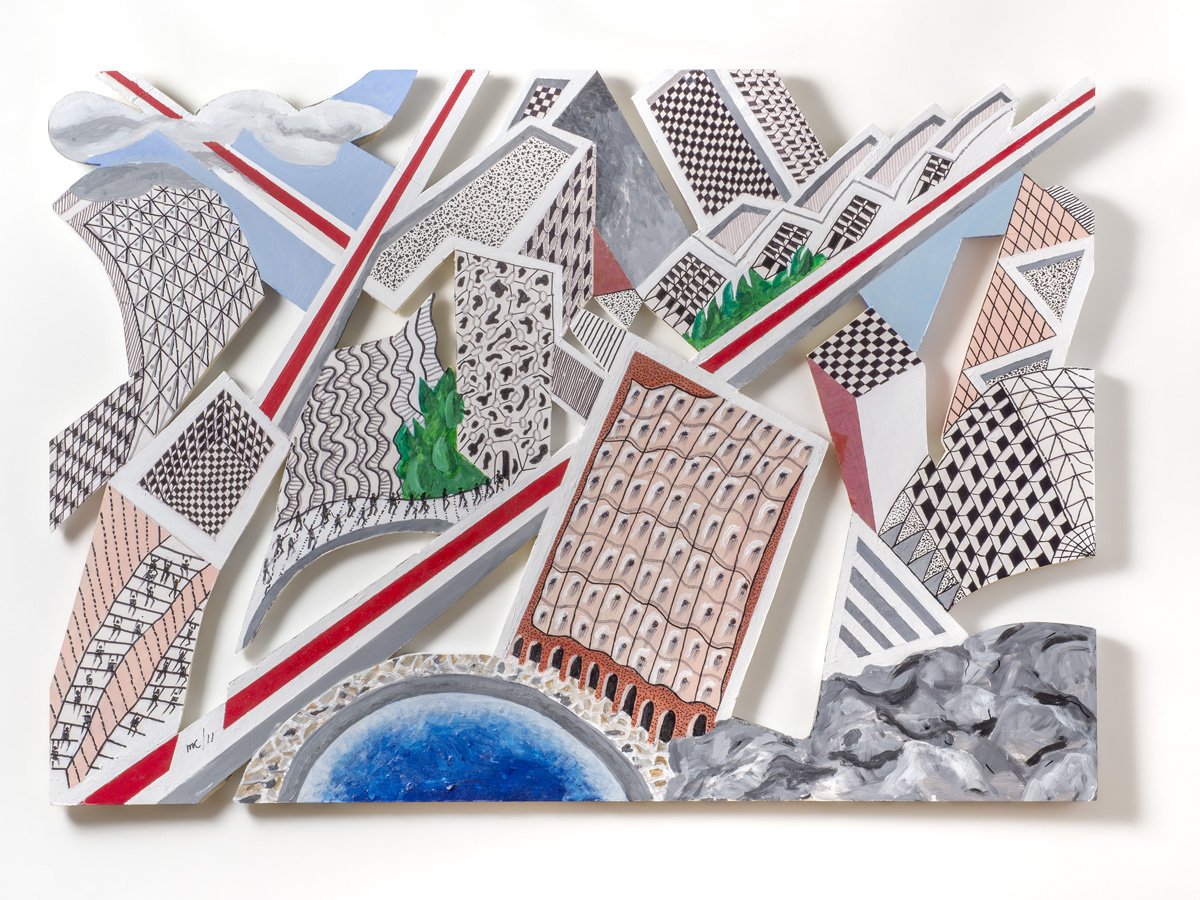 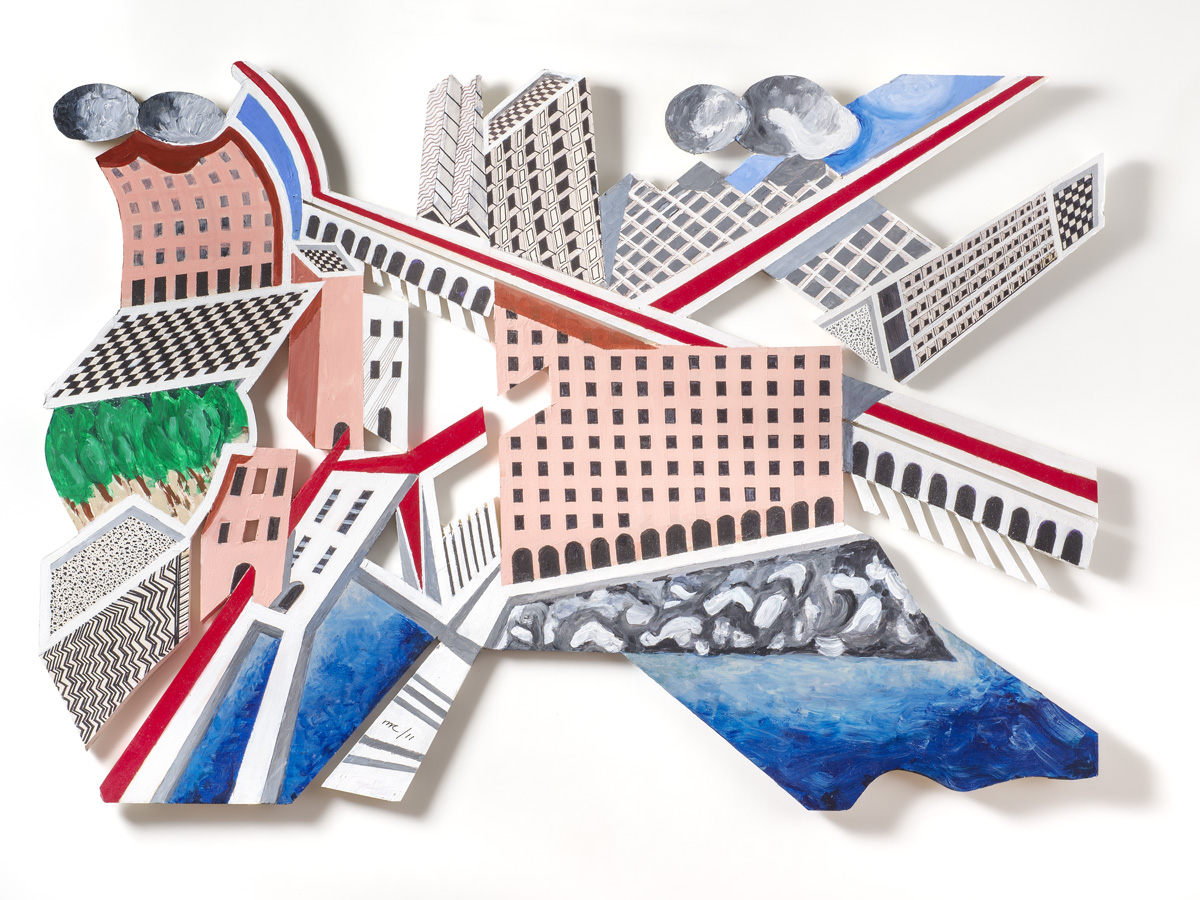 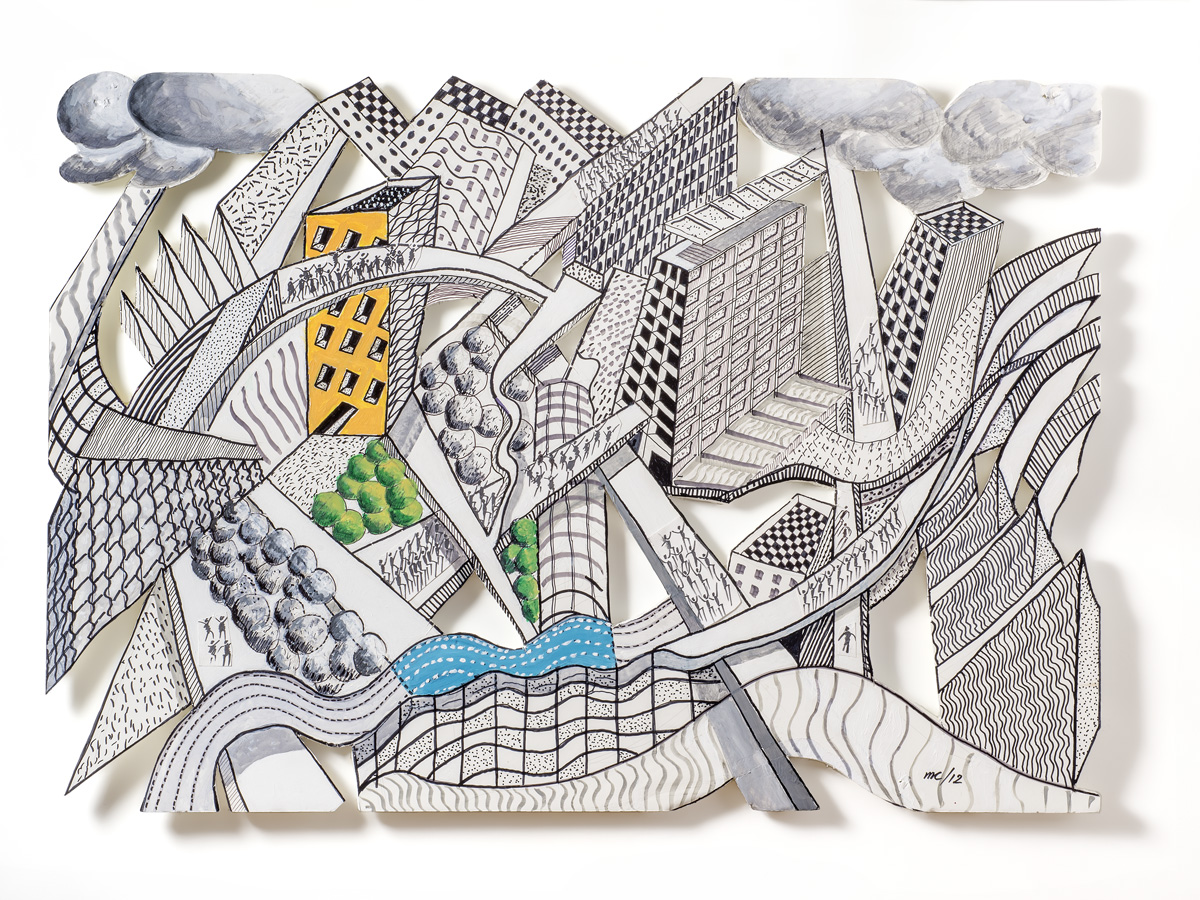